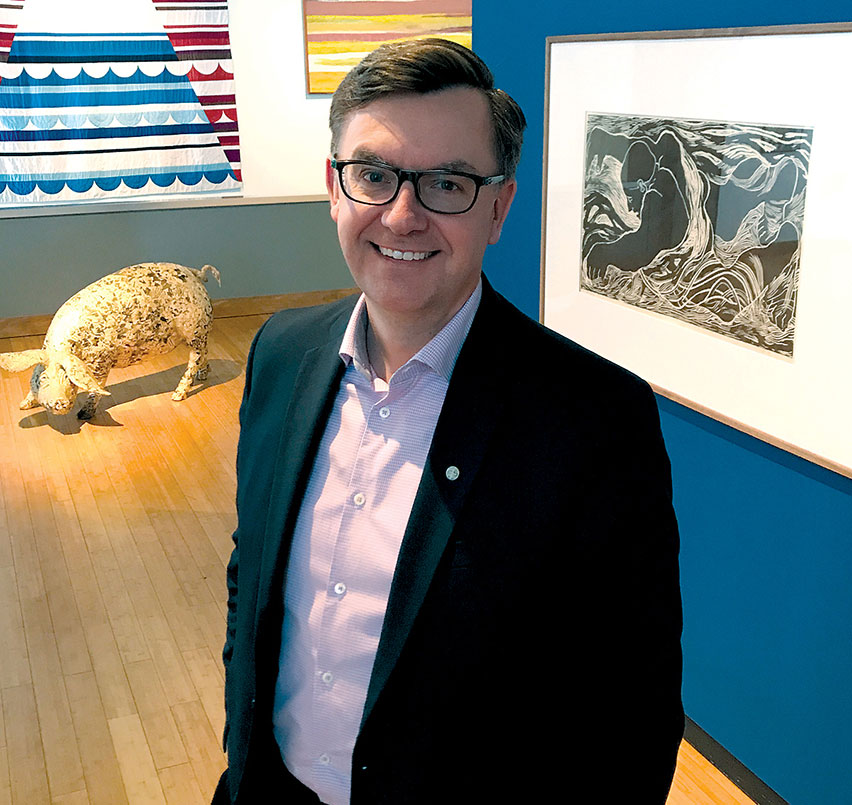 “Arts are ways into emotions. Arts are where we connect,” Steve Bellamy says. In his third month as CEO of Confederation Centre of the Arts, he’s still pinching himself that he has arrived in this place.

“I’ve been lucky to live in a number of places in Canada,” he says, “and towns of 250,000, or larger, would be lucky to have a place like (Confederation Centre).” In moving his family—himself, his wife, and two small children—to Charlottetown, he repeats a path his own family followed when Steve was 12 years old. He graduated from high school here and from UPEI, in music, before moving away.

“It has been 23 years since I lived here,” Steve reflects. “I like to say I left before the Bridge and before the Internet.” He returns to marvel at “the diversity… and the richness of experiences available to people.” And, he adds with enthusiasm, “The tradition of excellence in hospitality is even more elevated.

“I’m generally still giddy about being back. Confederation Centre is a creative hub in Charlottetown, and I’m excited to collaborate with the other institutions that are around us.”

Having gone away and come back, “I have a better appreciation,” Steve says, “for the complexity of the relationship Confederation Centre has to Charlottetown, to PEI, to the Atlantic region, and to Canada. One of the things that’s exciting to me is that complexity. It doesn’t have to serve only the nation—or only serve the local community.”

Steve reflects, “It’s a very important time in our conversation about Canada. In one sense, historically, Confederation Centre was meant to be a monument to the Fathers of Confederation. It is important to note that in the mandate, through the arts, we also celebrate the origin and evolution of Canada, and that evolution is particularly interesting right now… We just need to make the space to tell the story.”

Something that drives Steve’s commitment to making the space and telling the story is youth’s role in “the current story of evolving Canada.” He speaks glowingly of the Confederation Centre’s Young Company: “There is a positive message of a desire for understanding coming from youth. I’m excited about the national relevance—the national conversation of youth around identity. I think youth, out of necessity, lean into the hopeful view.”

Education streams at the Confederation Centre of the Arts also see “500 or 600 kids through here every week.” Arts education responds to our “existential need for the arts… Arts education is more about getting to know yourself and the human condition—being open to perspectives different from your own.”

He’s also interested by “how far PEI is advanced on seeing the arts and culture sector as a contributor to economic development and innovation.” He continues, “The arts cost more to do than they bring in—on a simple exchange. Those of us in the arts have a responsibility to become better at talking about all the values of the arts, including economic values”—including, he notes, the “$26 million a year Confederation Centre contributes to the GDP of the area.”

Steve has been able to maintain his place in art-making. Following his music degree, at UPEI, he didn’t continue to perform music, but he went right away into music, as a producer and recording engineer. He reflects, “I’m privileged to have worked with amazing jazz and classical artists.” His time in the past ten years has been focused on arts administration and arts education, but “I’ve been lucky,” Steve says, “that I haven’t yet had a gap where I’m not (producing records)—though I can only work on one record a year, now.”

He sees his role at Confederation Centre as continuous with past roles: “A producer or recording engineer is ultimately a facilitator. I see my role here at Confederation Centre as a facilitator, creating conditions where wonderful things can happen. I’m trying to create conditions where the amazing, national-calibre team here can do what they can do.”