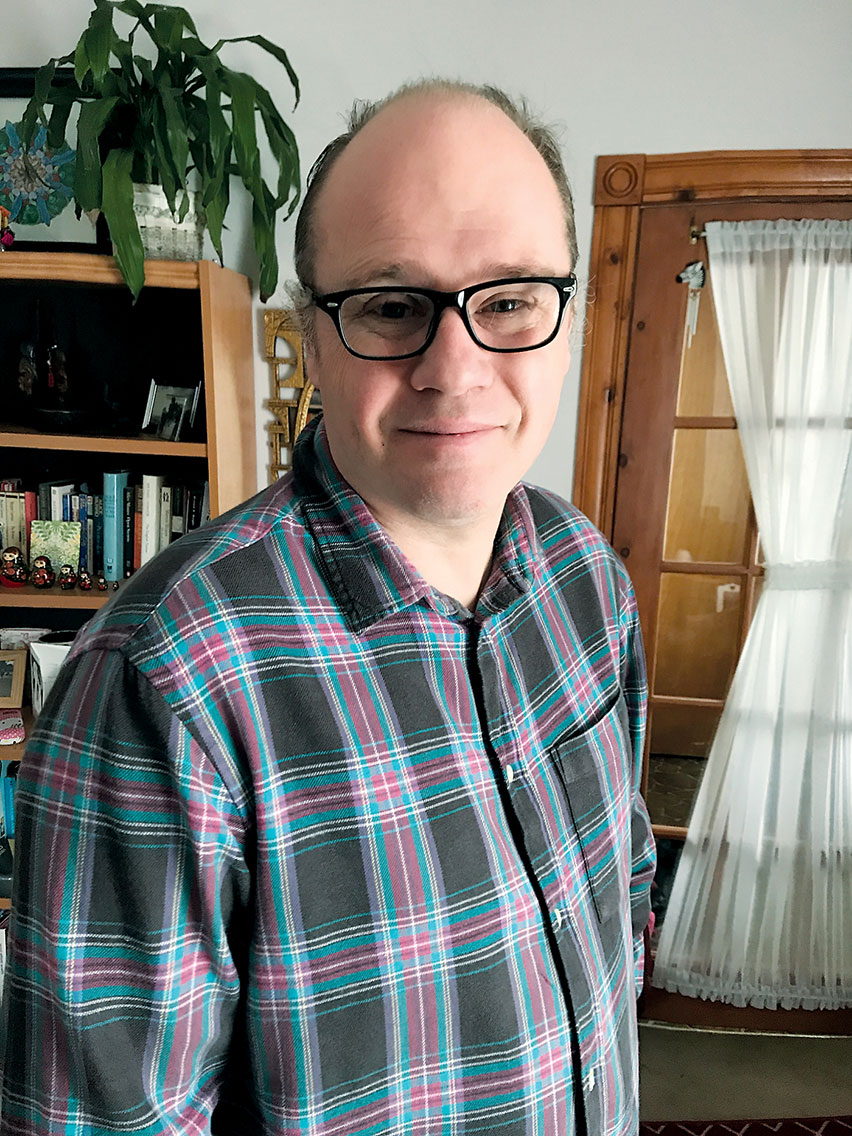 “Violin doesn’t let you express to the full what you want to express—but that’s what you have,” says Sean Kemp when asked about his experience as a classically-trained violinist who now plays as frequently with folk musicians: “Within the constraints of Classical music, I always heard other music I loved.”

Sean is thoughtful and reflective as he contemplates a career that brought him, circuitously, to Charlottetown from the U.K. and, also circuitously, from acting to a diverse musical life that includes playing violin for Lennie Gallant and eclectic chamber music with the Atlantic String Machine he co-founded, and which also plays string arrangements with singer-songwriters.

Sean arrived in Canada, in Halifax, in 2002, with his then-partner and young son, just as Lennie Gallant was looking for a violin or fiddle player. A friend of a friend referred Lennie to Sean. “His manager showed up with four CDs,” Sean recalls. “I’d never been asked to play a gig without a piece of sheet music.” Undaunted, Sean learned Lennie’s songs. “I previously had supported musicians,” he says. “By the time I got called up by Lennie, I’d done enough. I’d always been interested in pushing boundaries.”

Lennie also led Sean to a life on PEI, when a chance to play a full summer in Searching for Abegweit in 2014 after a period of ceaseless travel meant a summer on the Island with his son—and then to meeting his now-partner, Suna. “It was a move of the heart, not the brain, but I quickly felt welcome here.”

Sean also composes and writes arrangements as part of the Atlantic String Machine. “Writing an arrangement is more challenging than composing,” he says, “because the song has to be at least vaguely recognizable.” Arrangements are also special to him as another kind of meeting through music: “You sometimes meet the person (who wrote the song) through their music. By the time you meet them in person, that song has become a part of your life. It’s a non-traditional way to get to know a person.”

Sean started playing violin as a child in England. “My dad was a very good violinist—born in Sheffield in 1922, and he would probably have been a professional musician but for the war.” When Sean, at six, was heard humming a tune by Handel, his father put the music on the record player and said, “Okay, what about learning the violin?”

Sean played, and played well, but was not always on the path of a professional musician. “When I was a kid, I wanted variety… I studied acting in Moscow—jumping from an insecure profession in music to a profoundly insecure profession in theatre.” He thought he had diverged from the musical path, until, he recalls, he was acting in The Seagull and the director suggested he play the violin as his character walked offstage towards his suicide. “A door opened,” Sean says.

“I continued with the stage for quite some time, but I kept coming back to music,” Sean says. “In a way,” he adds, “acting saved music for me… It led me on a journey to discover the diversity of music, and the realization there are so many ways to have a relationship with music.”

Today, he says, “I’m exploring that diversity to a great extent—not fully, but a good amount. All my life and career I’ve done so many interesting things, and people look at that and say ‘aren’t you lucky.’ …But I often think how many times I could have just taken that one orchestra job and had a salary.”

From his home now in Charlottetown, with his son on the cusp of adulthood and studies in music, Sean says, happily, “I think I feel the most secure and stable I have been in my life. I feel like I have the space that if musically I wanted to try something, yes, it would be scary… but, yes, I could try it here. There are enough people in the community I know and trust, and enough places in the community you know that it could work… I feel very lucky for that.”