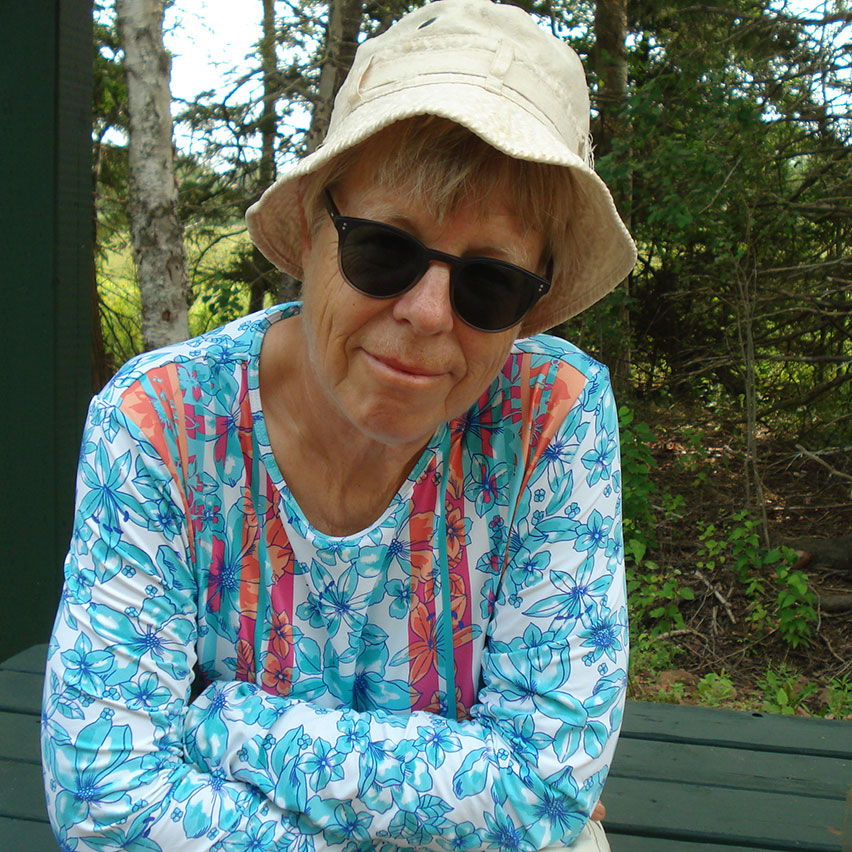 Life in the cove

“Would you like a column about living in the country?” JoDee Samuelson asked The Buzz in 2010. Since her first “Cove Journal” column in October 2010, the award-winning maker of animated films has captured the movement of rural PEI in monthly stills. This month, the collected articles and accompanying illustrations will be published as a book by Island Studies Press, The Cove Journal: Life on the Island’s South Shore.

We meet at the cozy, art-filled home she shares with her partner, fellow-artist Mari Basiletti, as JoDee works on her November submission. “If I don’t have anything in mind, all it really takes is a walk down to the shore,” she says.

“The Cove Journal,” she says, “is really about nature, and about neighbours, and events happening.” She says, “We put a lot of emphasis on bringing people together. We’re involved in almost everything in the community.

“Part of what makes quality of life in rural PEI is knowing a lot about everybody’s business. You need to be a little bit snoopy to get along in the country,” she says. JoDee leafs through a slip-cover filled with clippings of “Cove Journal” articles about bean suppers, picnics at the shore, Christmas concerts, gardening, and farming. “I try to always mention the Cove,” she notes. “I never say which cove because I want it to be representative of any cove, any shore, of PEI in general.”

JoDee has been connected to rural PEI since she and her partner of the time arrived and opened The Root Cellar, PEI’s first health-food store, in the early 1970s. They were living in North Rustico when he decided to try a hand at painting—but it was JoDee who used the art supplies.

“I always drew and painted but didn’t think of myself as an artist,” she says. She was also playing a lot of music at that time—“At one point,” she remembers, “I thought I would make my career in music.” She played violin along with mandolin and guitar and at one point had made a living busking in the Paris Metro.

Perhaps her dual loves of visual and aural art were always tending towards film-making. Later in the 1970s, she got together with Mari, and they continued living in the country. She got a Bachelor of Education and thought to be a teacher—but only found work as a substitute. Finally, in 1989, she took part in a workshop on film animation then applied for an exploration grant and received $9,600 from the Film Board.

Three-and-a-half years later, she had made the animated short The Bath, which won awards and led first to a full-time job as an animator, and then to contracts, with the National Film Board.

“My mother was a commercial artist—and a fine artist, and a potter,” JoDee recalls. “She always encouraged me… and when I started in animation, she said it was a natural fit: ‘You always drew things that were running or jumping or leaping.’ She was always so pleased when I was able to make a living from art.”

In her career as an animator, JoDee single-handedly created over an hour of animation. At 24 images per second, “That’s too much,” she laughs.

She remembers the analog process well. “A roll of 100 feet (of film) is about 2½ minutes—I would generally do 50 feet, about a minute—and send it off.” Fifty feet meant hundreds of frames of under-camera animation, painted on glass with underlighting. The processed film would come back. “I’d take it down to the Film Board and sit down—and it was such a high when things worked out.”

Semi-retired, JoDee says “I am not doing animation now. Too much time at the computer, and you don’t blink often enough.”

JoDee still finds herself in front of screens doing graphic work or writing. She is also the artist behind wall maps of shipwrecks and pioneer cemeteries, lighthouses and shipwrecks, old houses of Charlottetown, and old mills that adorn cottage walls Island-wide.

A long-time obsession with historical water mills led to a Master of Arts in Island Studies on the topic, and JoDee’s connection to Island Studies contributed to her new publication.

The Cove Journal is JoDee’s first book, although she has self-published a book about bread for friends and family and has an unpublished novel about rural PEI.

“I feel very lucky for writing (“The Cove Journal”) for The Buzz. I get more feedback than for anything else I’ve done,” JoDee says. Living, writing, and drawing rural life has a quiet, moment-by-moment quality she loves. “I love being home and having the phone never ring. It suits me just fine,” she laughs.

Rising to the top

On top of the world