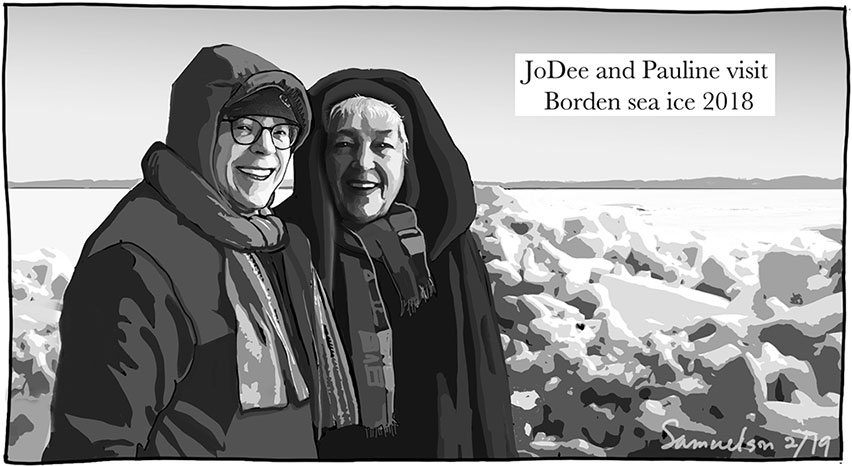 The Cove Artwork by JoDee Samuelson

What would we do without friends? Oh, relatives are good too, but we don’t get to choose them. Friends are people we bond with for reasons other than DNA. Here in the Cove, once you’ve cleaned the school and washed dishes so many times with this person and that, you can’t help becoming friends. Pauline Thomson is one such friend and I think she deserves a proper write-up.

In Pauline’s words: I was born in the family home on the banks of the Tryon River. It was 1939 and the war had just started. Mother used to say, “You started the war!” I was a little heller. We lived beside Lord’s millpond and that pond was my life. I swam in it, skated on it, slid down its banks, even took a shower under the waterfall. You wouldn’t think of letting a child do such a thing these days!

We had a girls’ hockey team called the Tryon Abby Sisters. I was goalie—I had a few old pads, nothing much. We played against Borden, Summerside, Charlottetown, and won the championship two years in a row. When I finished Grade 10 at North Tryon School I wanted to join the Air Force and become a nurse. I wrote the provincial exams and passed, and went to town to find a job until I turned 18. Our neighbor George MacKay took some of us in to the unemployment office. There were lots of jobs and I ended up at Rogers Hardware. That place terrified me! I was scared to death that I’d break something, so when the opportunity came to work in the Rogers’ household I jumped at the chance. Irene Rogers was like a mother to me. She taught me how to cook. She loved making soufflés—that was quite a trick! She was pregnant and she’d say, “I’m going to lie on the chesterfield and listen to My Fair Lady. Curl up in that chair, Pauline. You’ll love it.” And I did. She gave me that record when I left.

I made it into the Air Force and got to Québec, but on my first weekend pass who should show up but another Islander who’d had his eye on me back home. He arrived with a diamond ring! Of course I agreed to marry him. What a mistake that was. Goodbye dreams of nursing. But I had three beautiful girls so I don’t regret that part of it.

I worked at something all my life. I got my hairdressing certificate and my early childhood and kindergarten teaching diplomas from Holland College. I learned something from every job I had. And I loved volunteering. I have no idea why, but in 2012 I was chosen to receive the Queen Elizabeth II Diamond Jubilee Medal for community service. Can you imagine!

I met my [present] husband Floyd at a single, widowed and divorced dance. That was it and we never looked back. What do I think about the Cove? I wouldn’t live anywhere else. I love the water, the flowers, the wildlife. Our fox. Our pheasant. Our bald eagle. Someone said, “It’s not your bald eagle, Pauline.” I said, Yes it is! We’re friends.