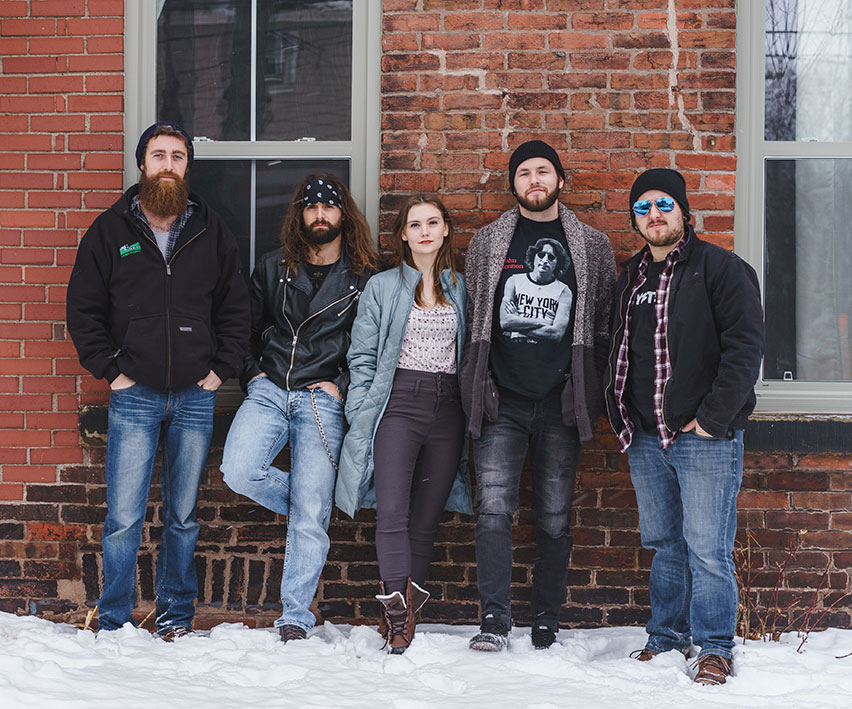 The Brad Milligan Band is all about being true to themselves and keeping it real while they make music that both they, as well as any audience they perform in front of, can connect with.

“Musically, as a band, what we want to achieve is just connecting with people, and connecting with ourselves,” said drummer, Andy Adams. Based out of Charlottetown, the other members of Brad Milligan Band are frontman Brad Milligan (vocals, rhythm guitar), Nathan Waite (lead guitar), Ceili Galante (vocals), and Matt Roch (bass).

Adams, Roch, and Milligan played together in 11th Hour for a few years in Charlottetown. After that, Milligan and Waite played together in Lost Haven. Galante, who is here attending Holland College’s music program on exchange from Berklee, met up one day with the other band members and decided to stay on PEI for at least another year after her program had ended in order to sing in the band.

They’ve  been playing together for eleven  months and won Q93’s Battle of the Bands back in early 2018. They played at Victoria Park on Canada Day, and in August, the band was one of the local acts to open for Kim Mitchell and The Glorious Sons at Rock the Boat Music Festival. The band’s diverse sound may be behind its quick growth.

Milligan writes all the band’s music and lyrics, often as basic forms of the songs, which are brought to the band to be expanded on and worked through as a group. Most songs are about everyday life events surrounding Milligan and his friends. “We’re just about writing real music. Music from the heart. There’s no faking it,” says Milligan. While some songs touch on dark themes, Milligan generally tries to end things on a lighter note. “There’s a light at the end of the tunnel—there’s happy side to the songs in some way, shape, or form. That’s the way I try to write.”

Like many bands today, it can be difficult squeezing Brad Milligan Band into any one genre. The band says they fuse sounds from the ‘60s, ‘70s and ‘90s, including influences of blues, Motown, pop, and the British Invasion, which results in their own sound.

“It’s super different from what people would normally see, because we can kind of fit on both ends of the spectrum,” says Galante. It’s poppy enough to be accessible to everybody, while not straying too far from straight up rock and roll.

“We’re a rock band, first and foremost” says Milligan. “We’re there to entertain, that’s our main thing. We want people to come to our shows and let loose, have a good time, and forget about their day-to-day lives and get into the music. It’s a super high energy show.”

The band believes the rock scene on PEI is definitely growing. The scene on Island has often been filled with many heavy metal bands, as well as bands on the opposite end of the spectrum, but not always much in between, said Waite. “There’s definitely a revival in the music scene, there’s a lot of bands right now. It’s great to see,” says Milligan.

The band’s aspirations are to release a full-length album this year, and to line up a small tour around the Maritimes this spring. Their new single “When Will I Learn” is available for streaming on Spotify. Catch them open for Wintersleep’s Jon Samuel February 9 at Hunter’s Ale House.